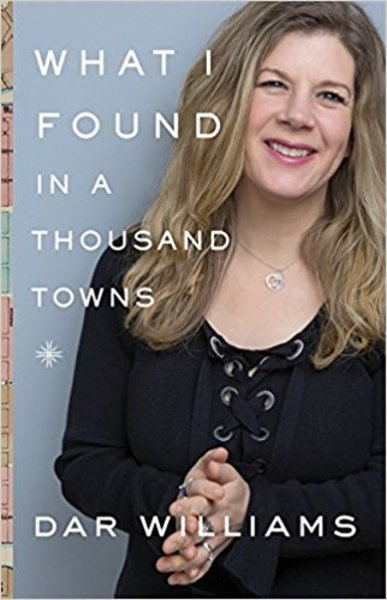 Dar to speak at this year's Preservation Leadership Forum in Denver Colorado hosted by The National Trust for Historic Preservation on October 10th, 2019.

Dar Williams has been called “one of America’s very best singer-songwriters” by The New Yorker. She’s released ten studio albums and authored four books including her latest, What I Found In A Thousand Towns. Known as much for her staunch progressive ideals as her raw acoustic energy, Williams has been captivating audiences with her sheer elegance and honesty in her folk-pop songwriting since the '90s. Williams’ growth as an individual over her two-decade-long career has gone hand-in-hand with her evolution as an artist, touring along the way with such distinguished peers as Joan Baez, Patty Griffin, Ani DiFranco, Loudon Wainwright III and Shawn Colvin among others. In preparation for Williams' performance during the TrustLive on Revitalizing Small Communities at PastForward 2019 we wanted to share an excerpt from What I Found in A Thousand Towns, along with a few videos of Williams in concert.

How do you reach into the past to find your present and future? To answer that, we must follow the sound of slightly ominous chanting in the distance. It’s early December in Phoenixville, Pennsylvania. Thousands of people stand at the edge of town shouting in unison, “Burn that bird! Burn that bird!” Above them a phoenix looms with archaic, graceful severity, eighteen feet high, constructed out of wooden pallets.

Every year more people take part in the spectacle of the Firebird Festival. Dancers writhe with lit torches as the excitement grows. And then, suddenly, the dancers charge to their positions at the base of the firebird, tip their torches, and touch their fire to tall, angular legs and feet with foot-long talons. The flames climb. The cheering erupts. Soon the whole bird is engulfed. There is a moment when the phoenix stands, her beak, wings, and prow-like chest clearly defined against the night sky in pure fire. Soon enough, slats of wood start to fall like burning feathers. Then the body, consumed, starts to collapse. By morning, the phoenix is a wide, shallow pit of ash.

A small group of people then returns and starts digging in a slurry of mud and ash to pull out small clay birds made by people in town. The birds have been fired once in a kiln and a second time in the heat of the burning phoenix. Everyone makes two birds, one to keep and one to sell to raise money for the next year. After they are retrieved, the birds are brushed off to reveal the charred and iodized designs that the fire has imprinted on them.

This digging out, on a very grand scale, is what Phoenixville did over a twenty-year period. It dug into the ashes of its past to pull out its fragile, fire-mottled treasures. More than two hundred years of history found their way into the plans that invigorated the prosperous, highly functioning downtown we see today. Phoenixville has risen carefully and creatively, and it provides a wonderful model for towns and cities everywhere. After all, everyone has a history.