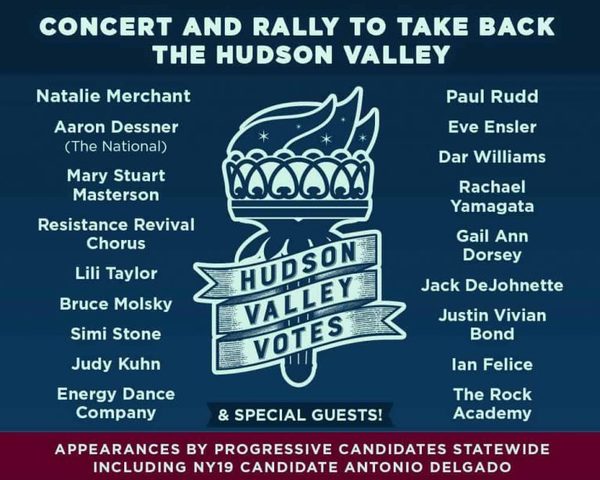 With the crucial mid-term elections nearly upon us on November 6th, a group of concerned citizens has banded together with local and nationally recognized artists to present an evening of music, performance and activism.

Dar will perform with other artists at HUDSON VALLEY VOTES on Saturday, October 20th at UPAC. The line-up of Hudson Valley based musicians and actors performing include: Aaron Dessner of The National, Natalie Merchant, actress and filmmaker Mary Stuart Masterson, actors Paul Rudd and Lili Taylor, activist and author Eve Ensler and many more. Progressive Democratic candidates and elected officials will join artists on stage, including NY19 Candidate Antonio Delgado.

On October 20th at UPAC, Hudson Valley artists will engage in the political process by using their voices in support of our progressive Democratic candidates. We have seen recent elections in upstate NY decided by just a handful of votes. Anyone who thinks his or her vote doesn’t matter needs to think again; everyone must participate in this midterm election. The fate of not just our region, state or country depends upon it…the destiny of the entire world will be determined by the outcome of this vote. -Natalie Merchant

Tickets and more info on the event here: http://www.bardavon.org/show/hudson-valley-votes/